No Audio Sent/Received to One or More Musicians Print

If you have been in many JamKazam sessions, at some point you are almost certain to have seen the dreaded "No Audio" yellow text link displayed on a grayed out JamKazam audio track (pictured below with arrow). 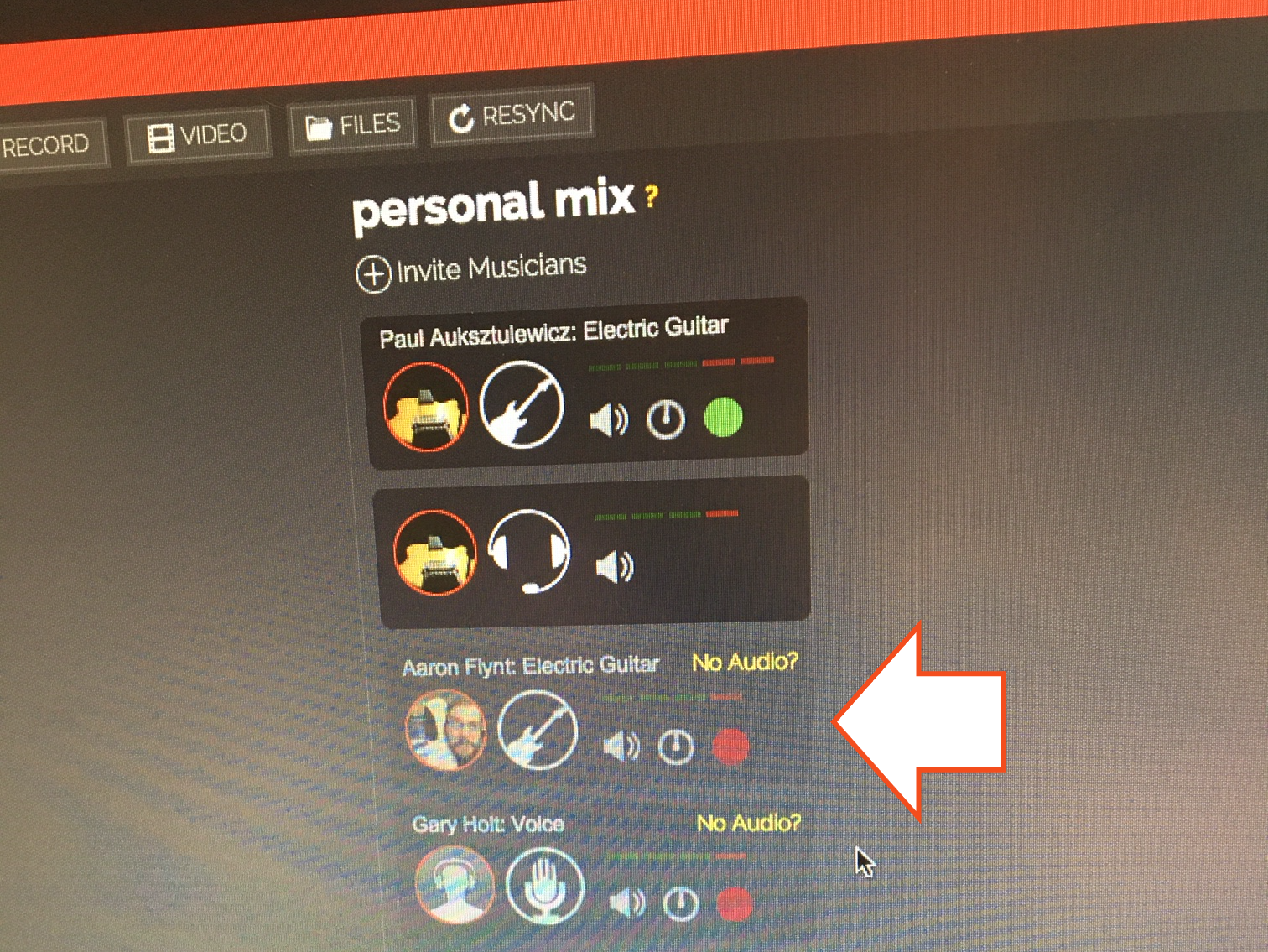 You may also often see a dialog box referencing this error displayed (pictured below with arrow). 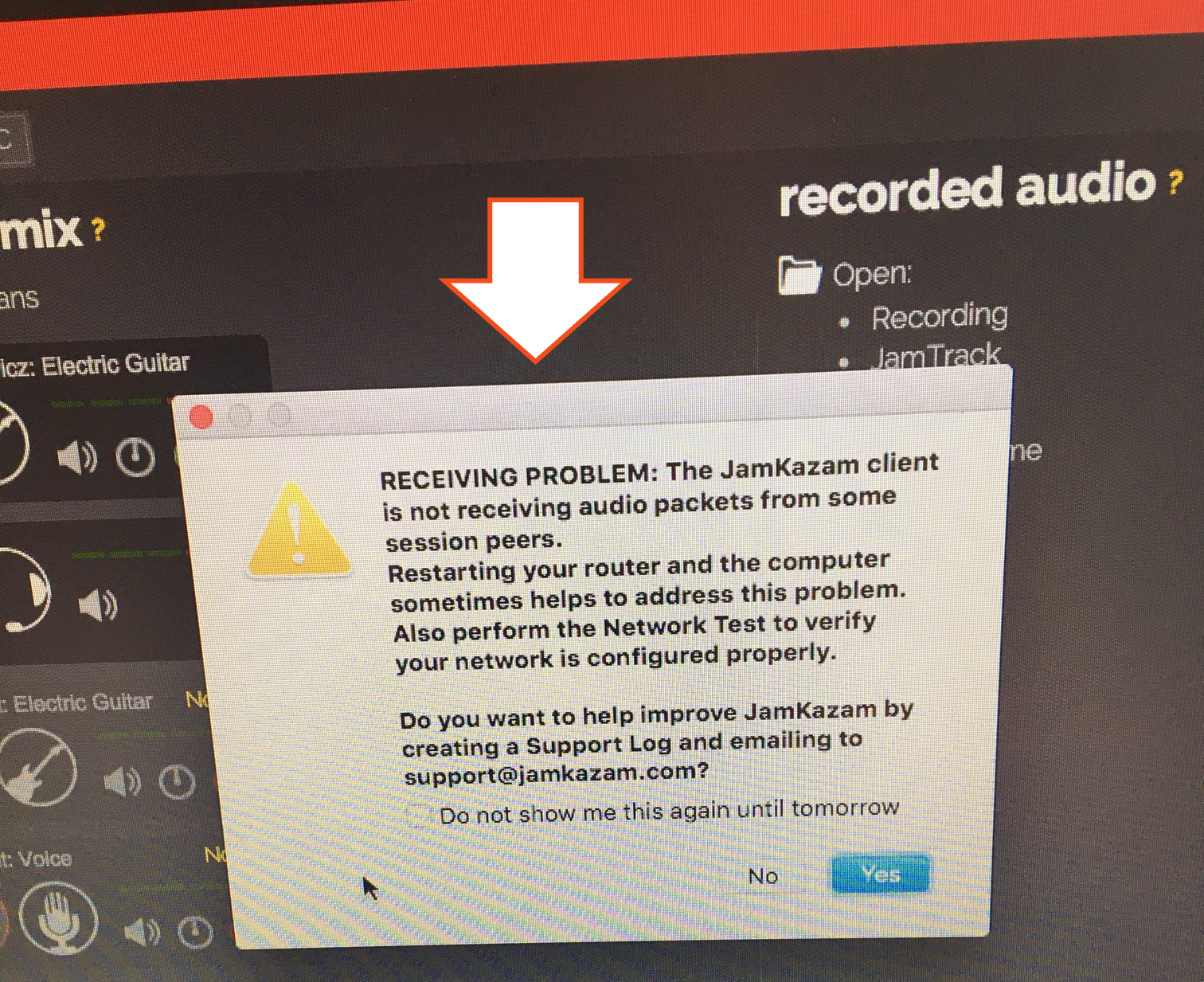 This error condition occurs and is displayed to you in a session when an audio stream sent over the Internet by another musician in the session is not properly received by your computer and the JamKazam application.

The most common cause of this problem is that the Internet connection between you and the other musician failed when trying to establish the audio streaming connection. Due to the way JamKazam streams audio, which is much more complicated than the way that Zoom and other conferencing applications stream audio, establishing this streaming network connection can be "touchy" - and it can fail every time due to network configuration problems - or it can fail sometimes and unpredictably just because it is touchy, even if your network is configured correctly.

As a result of this, there are a number of different things you can do/try to see if you can fix this problem, and we'll run through these below from simplest to most complicated.

The first to try is to have one of you leave the session and then re-join the session, and then wait up to 10-15 seconds or so to see if the audio stream gets established properly. If one of you tries this 2 or 3 times and it doesn't clear the problem, the other one of you can leave and re-join a couple of times. If there is not a permanent/serious networking problem causing the failure to connect, this simple exercise of leaving and re-joining can often clear the problem and establish a successful streaming connection.

If restarting the JamKazam app doesn't clear this problem, the next bigger step to take is for the musicians in the session that are having the "no audio" problem to leave the session, close the JamKazam app, and then reboot their computer *and* reboot / power cycle their home router. Home routers can get sideways and cause these kinds of connectivity problems, and a reboot will sometimes clear the problem.

If none of the above steps clear the "no audio" problem, then before taking the next step, which is a bigger one - it's also worth checking on the other possible cause of this problem. If one user's audio gear is not properly configured/connected/running, then the lack of any audio input can cause this problem - because there is no audio to stream. We have seen this cause the issue from time to time. It's less often the problem, but it can happen, so it's worth checking that both musicians having this problem hear their own audio in their headphones - which would indicate that audio inputs are being processed successfully on both ends.

OK, so then if none of the steps so far have cleared the problem, it is likely that one of the user's home routers is blocking the stream due to some kind of setting in the router. In this case, the only way to fix the problem is to update your router settings to allow the audio stream to work. To deal with this problem, please refer to this help article that explains how to open the ports in your network that JamKazam uses for audio streaming.

Finally, please note that if you are trying to use JamKazam not from your home but from a corporate or company or university or other organizational location/network, these enterprise-style networks are typically much more "locked down" than home networks, and most of these networks will block JamKazam's audio streaming. If you need to be able to use JamKazam from an organization's network, please refer this help article intended for IT/network administrators who can make the network changes needed to support this kind of use.