If you have reached this help article, it likely means that you know what jitter is - at least at some level. That said, before continuing with this article, we suggest that you read this help article to better understand how to view and interpret in-session diagnostics and stats, and then come back here to continue forward.

Internet jitter happens when the Internet connection between two musicians is not sufficiently reliable. JamKazam, when streaming audio between musicians, usually slices up audio into 400 packets per second - so that's one packet every 2.5 milliseconds. These packets get sent over the Internet, and if these packets don't arrive in the right order and exactly on time, bad things happen to your session audio. To prevent these bad things, if there is jitter JamKazam must use a buffer - basically a mini-queue where we stash these audio packets - and the more jitter there is, the more buffer there must be to prevent your audio from getting trashed. And the bigger the buffer, the more latency. So if we have to create a buffer of 4 packets, we have just added 4 * 2.5 = 10 milliseconds of latency to your connection. Which is obviously bad. And thus, a stable and reliable Internet connection is incredibly important.

So with that as a context, let's look at the screenshot below. In the Internet section of the diagnostics display for the musician Seth, you can see that Connectivity = WiFi (which has a red dot to indicate trouble), and that the two Jitter stats are also both in the red. This will definitely negatively impact both latency and audio quality in this session. 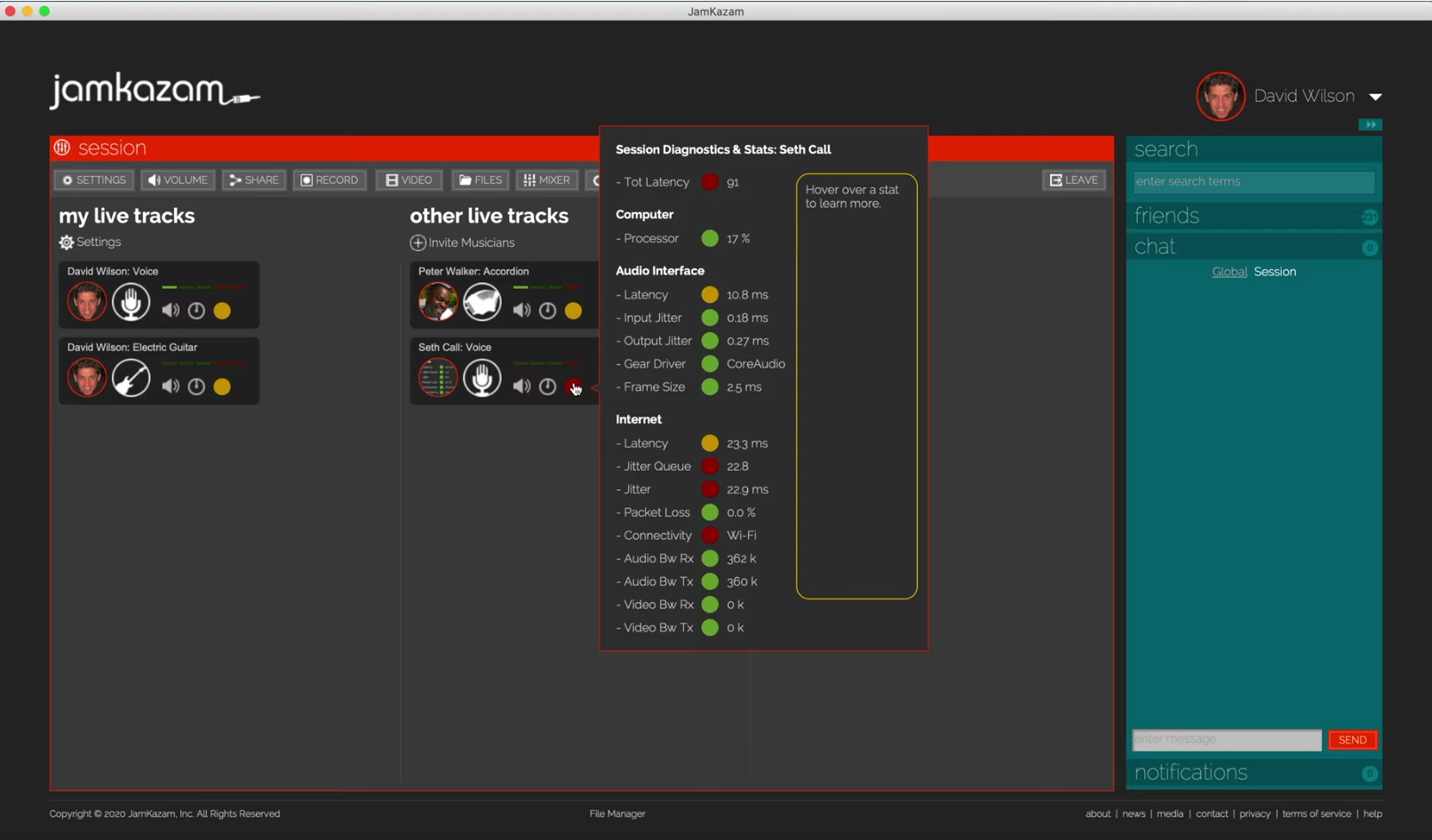 The first thing to look for is the Connectivity stat. If this says "WiFi" for the other musician, this indicates that the other musician is using WiFi rather than a "Wired" Ethernet connection from their computer to their home router. WiFi almost always causes jitter problems in sessions because WiFi routers can almost never keep up with the packet rate that JamKazam drives in sessions. This has nothing to do with how much bandwidth someone has. So if you see WiFi here, that is a problem, and you should ask the other musician to get an Ethernet cable (and an Ethernet adapter if needed) to fix their connection.

If you both are on wired Ethernet connections, then the next thing we advise you try is for both you and the other musician to close the JamKazam application, and then both reboot your computers and both power cycle / reboot your home routers. It can be surprising how often routers can get sideways on performance. This won't show up when browsing/shopping on Amazon, but it can wreak havoc on ultra-low latency streaming sessions.

If this doesn't clear the jitter problem, you're starting to get into thornier problems with fewer answers.

So if either you or someone else with whom you want to play is on satellite or DSL Internet service, your best bet is to switch your Internet service to a different provider if another ISP offers either cable or fiber service to your home address.

If you are on cable or fiber Internet and are still having jitter problems after all the suggestions above, then it's possible your ISP simply has a poorly architected network in your particular area. We have seen this before. Or it's possible one of these other solutions might save you: