If you have backing tracks already, or find ones you like on the Internet, but they are a different audio file format - like .mp3 - you can easily convert your backing tracks into one of the supported file formats above using a free online media file converter, like the one at https://www.media.io/.

Now that we've covered a little bit of information about what backing tracks are, let's see how you can use them in a JamKazam session. To open and use a backing track audio file in JamKazam, click the "Audio File" option in the "Recorded Audio" section of the session screen (see below with arrow). 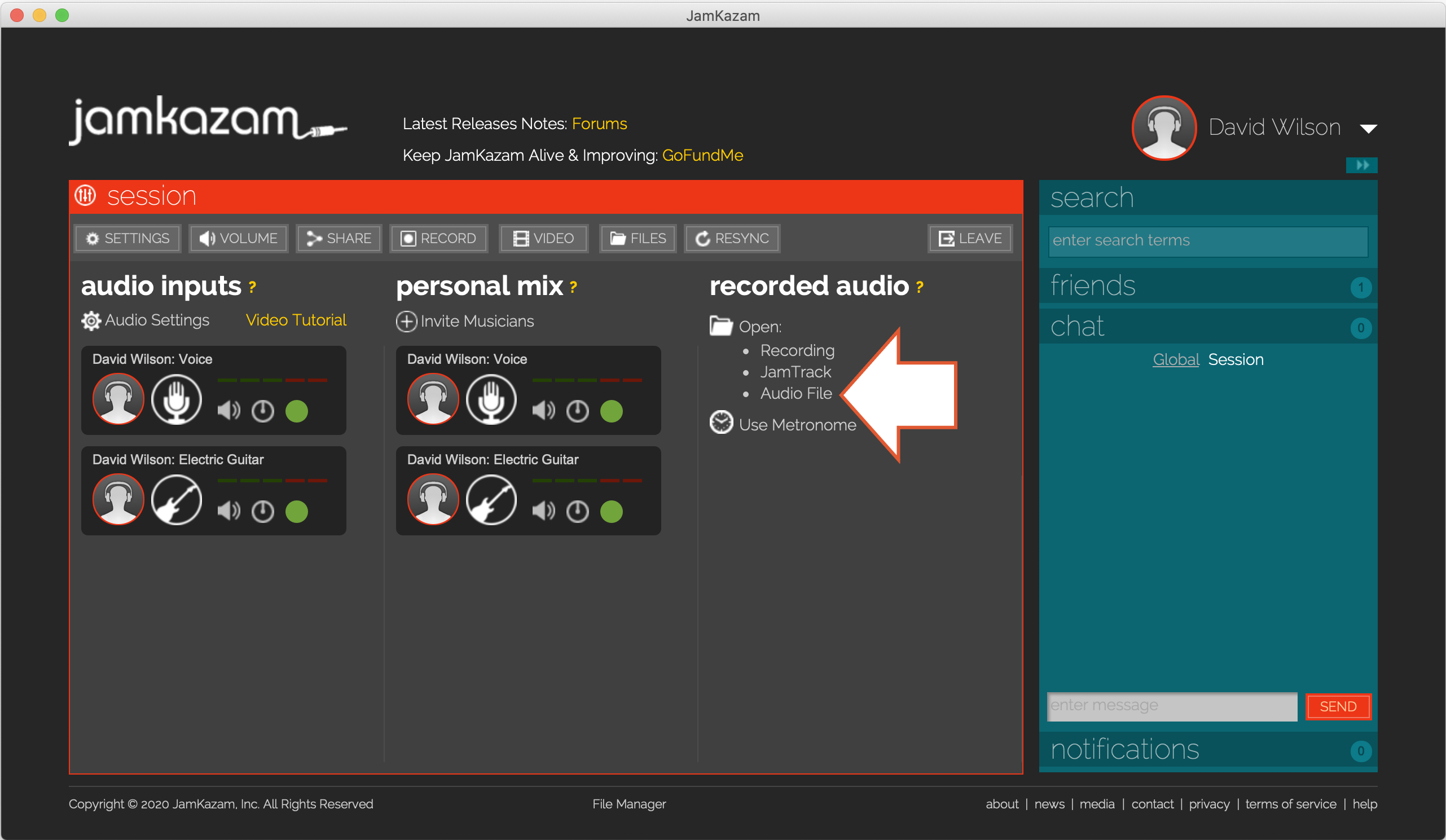 A common File Open dialog box is displayed. Select the audio file you would like to use, and then click the Open button at the lower right corner of this dialog box. 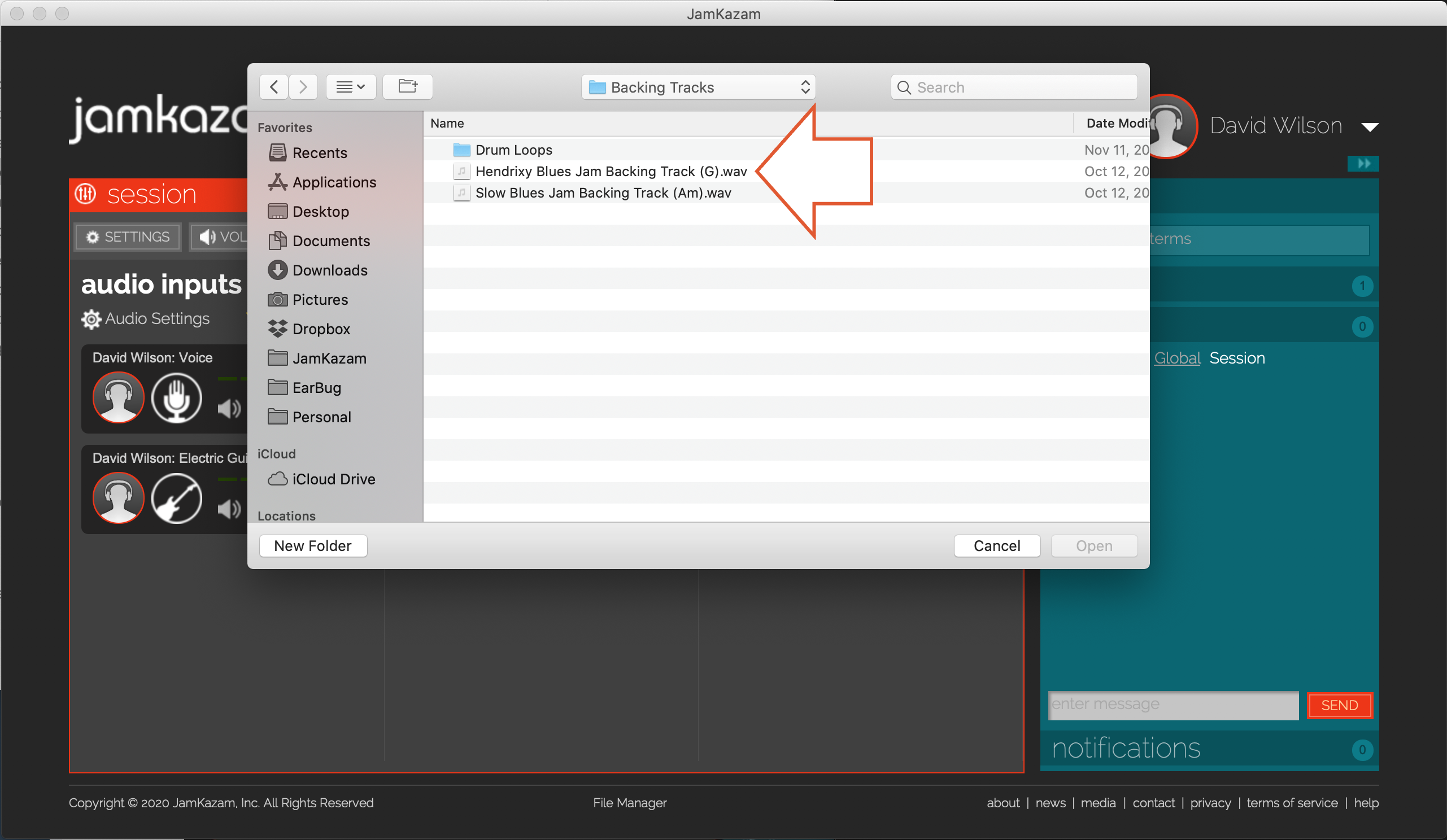 The audio file you selected is opened into the JamKazam session. An audio track for the backing track audio file is displayed in the Recorded Audio section of the session screen (see below with arrow pointing up). To adjust the volume of the backing track audio, simply hover your mouse over the volume icon on this track, and pull the slider control up or down, just like any other audio track. 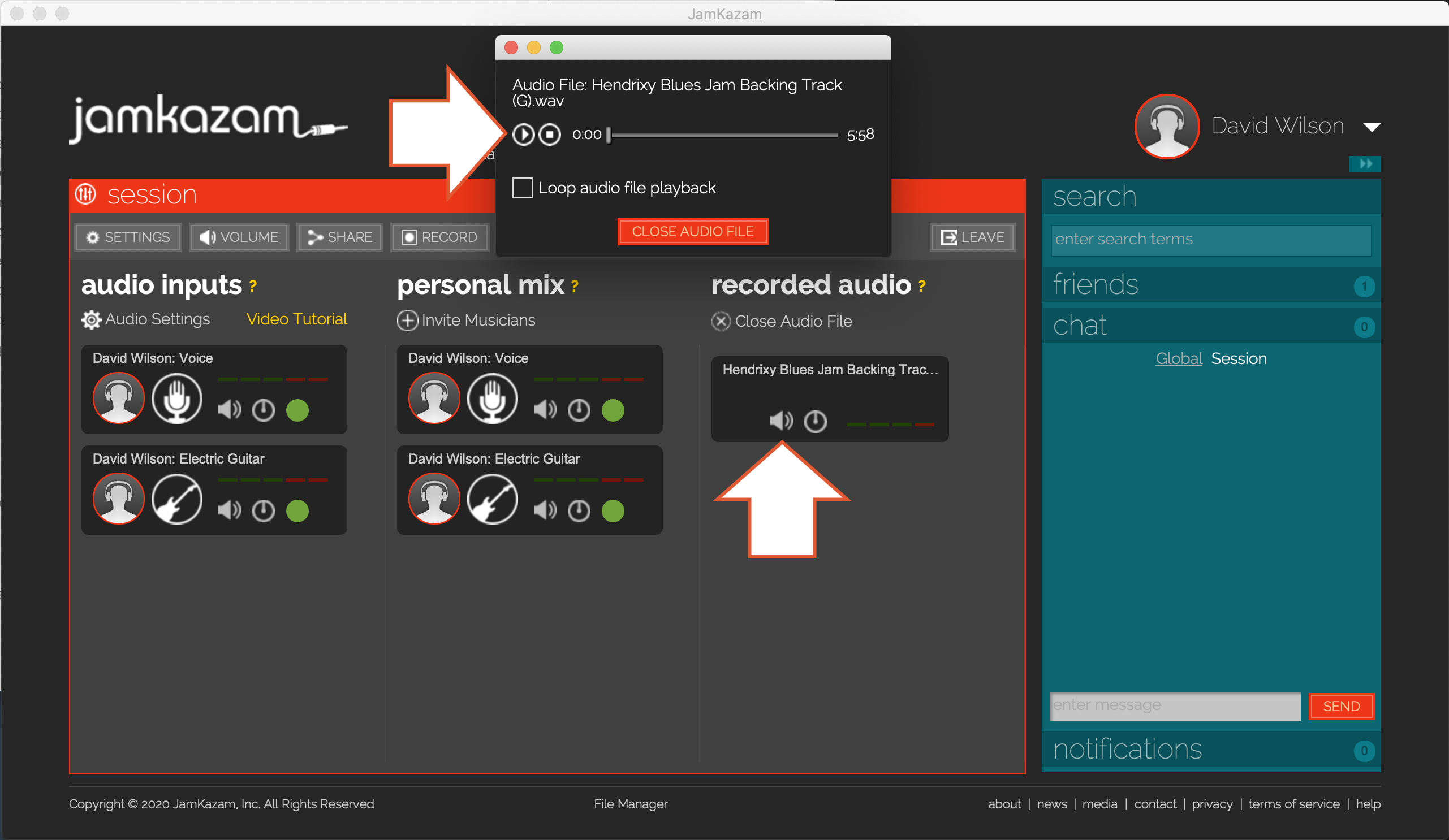 The player control for this backing track audio file is displayed in a small floating window. You can grab this player window by the title bar and move it around on your screen. Click the Play button to start playback of the backing track (see above with arrow pointing right). You can also pause playback, or stop playback, and you can grab the slider control to move playback to a specific place in the audio file. When you are doing using the backing track audio file, click the orange Close Audio File button in the player window, and the audio track and player window will disappear.

Another handy use of backing tracks is drum/rhythm loops. Here again, you can find free rhythm recordings that are designed to loop seamlessly/endlessly on the Internet, and then open/use these in JamKazam sessions - for example, if you don't have a drummer in your session.

To open and use a looped audio file in JamKazam, click the "Audio File" option in the "Recorded Audio" section of the session screen, just as we showed above in this help topic for any other backing track audio file. A common File Open dialog box is displayed. This time we'll select a drum loop audio file (see below with arrow), and then click the Open button at the lower right corner of this dialog box. 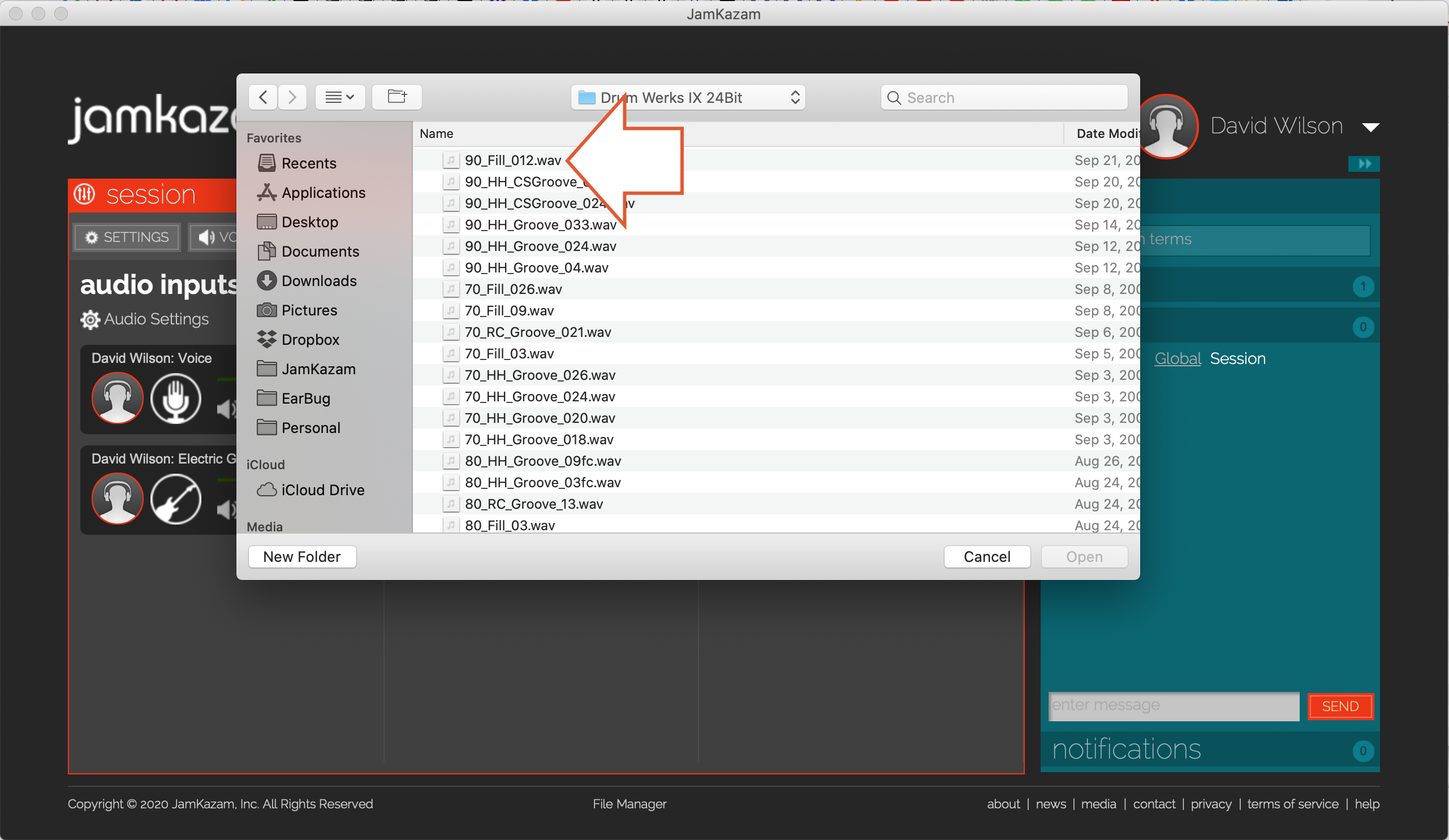 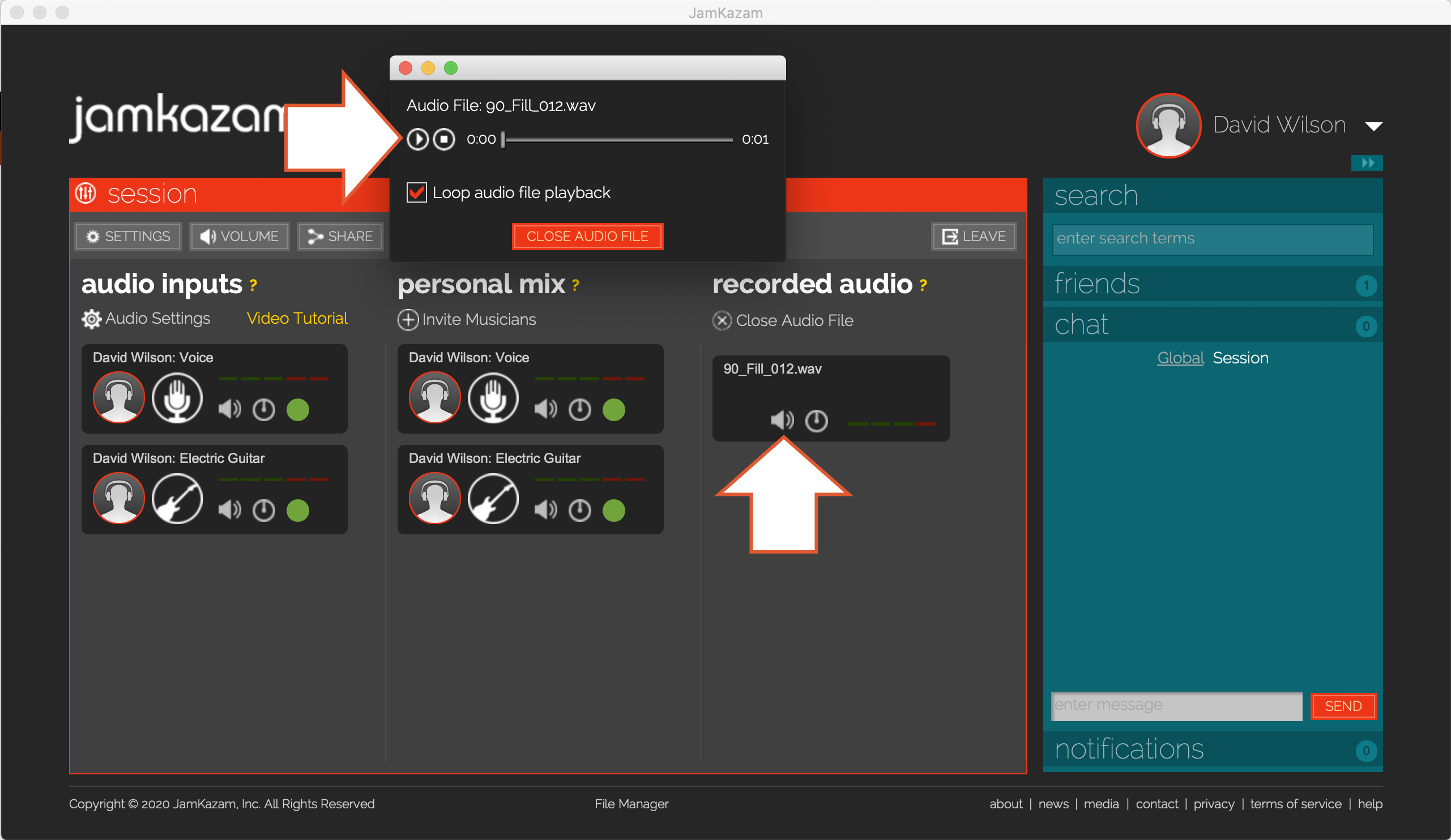 That's about all you need to know about using backing track audio and the looping feature in JamKazam. Below is a video you can also watch to see more of backing tracks and loops in action. The user interface of the JamKazam app is outdated in this video, but it's still useful to see (and hear) how these features can be used.