What Is Latency & Why Does It Matter? Print

In the context of JamKazam and playing music, latency is the time from the instant that another musician plays a note on their instrument until you hear that note in your headphones. If latency is too high, it becomes difficult or even impossible to play music together - because you hear other musicians in your group playing behind you. So keeping latency as low as possible is incredibly important to how successful and happy you will be in playing online sessions on the JamKazam platform.

Let's say there are two musicians in your JamKazam session. Total latency in your session will be the sum of:

Latency exists in all music performances - even when musicians are together in a single location. Latency is typically measured in milliseconds. One millisecond is one one-thousandth of one second. The speed of sound - the speed with which audio moves through the air - is about one foot per millisecond - incredibly slow. So if you are sitting in a room with another musician, and your chairs are 10 feet apart, there will be about 10 milliseconds of latency in your session.

The reason that JamKazam can work is that the speed of light is about 100 miles per millisecond. This is relevant to audio because the backbone of the Internet is fiber, and fiber moves data at something in the neighborhood of the speed of light (but less due to a number of factors). Still, theoretically if you are sitting 10 feet apart in a room and experiencing 10 milliseconds of latency, in 10 milliseconds your audio can fly up to about 1,000 miles across the Internet backbone.

That sounds great, right? But don't forget that you have to account for the time it takes for the computers on each end of the connection to process the audio. If you do a good job of optimizing your gear, you can typically get this into the 3 to 10 millisecond range. If you are at 10 milliseconds on your computer/gear, you just ate up the equivalent of up to 1,000 miles of Internet range. So paying attention to optimizing your computer and audio gear will pay dividends! We offer very valuable guidance on picking the right audio interface and setting up your audio interface and your Internet connection in optimal ways in the gear recommendation and setup instruction portions of this JamKazam knowledge base.

In the diagram below is one realistic example of what can be accomplished with JamKazam over a long distance. Let's say one musician is in Austin, while the other is in Chicago. Let's say both musicians have set up their gear so that audio processing takes a total of 5 milliseconds. And let's say that jitter takes another 3 milliseconds. Finally, while the distance between Austin and Chicago is 1,200 miles, let's say it takes 20 milliseconds for the audio data to transmit across the Internet. This is a total of 28 milliseconds of latency between these two musicians. This will feel/sound to the musicians as if they are sitting in a room 28 feet apart. 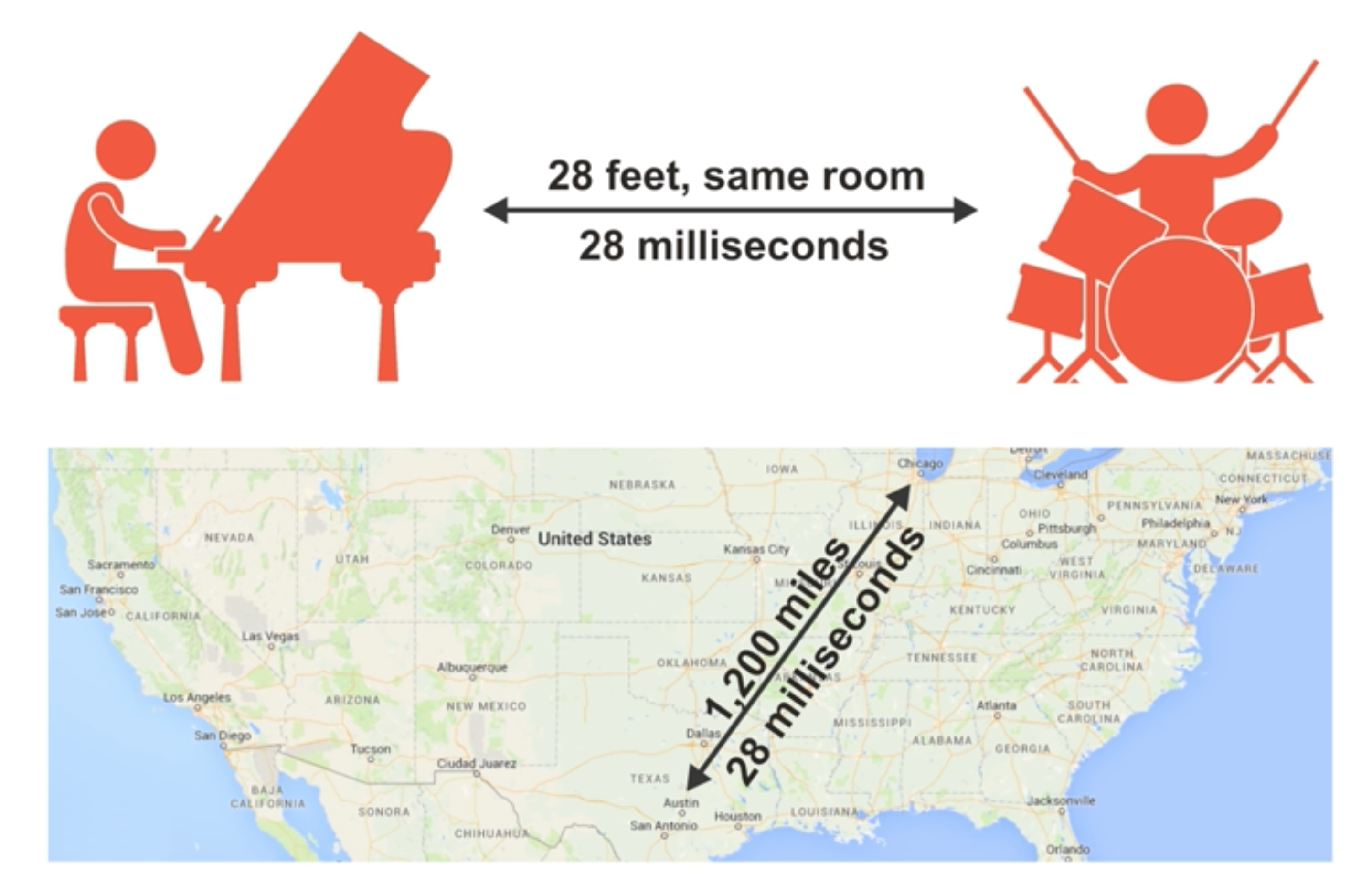 When considering how much latency is tolerable, it's worth noting that it depends on the tempo, the style of music, and how sensitive each musician is to latency. All of this said, as a general set of guidelines, JamKazam would provide guidance that:

Ready to learn more? Check out the "What Gear Do I Need to Play/Sing on JamKazam?" article.